An auditor turned artist, Margaret Tan has inspired a generation of artists in Malaysia, and proves that following your passion can take you in unexpected directions.

Kylie King caught up with her during a recent visit to Albury.

A sample of Margaret Tan's works. Her art is also featured in books and magazines.
1 of 4

How did you go from being an auditor to an artist?

I always wanted to be an artist, but my dad brought all these people over to tell me ‘you’ll never make a living as an artist’.

Although I won a scholarship to study Fine Arts, we couldn’t afford to send me to college. I was always good with numbers and almost the next day I got an invitation to be the second woman to be employed by the Auditor General in the 1970’s.

I went on to marry a Malaysian and he needed to go back there for his work as an architect.

As an ex-pat I was unable to work in Malaysia, especially in a field where you have so many graduates from accounting, so I went straight into charity work and literally fell into designing jewellery with antique beads to start off.

These were originally based on the trade bead culture of Sarawak. Beads were used as currency for the past one thousand years in Borneo and have great monetary value as collectables, even today.  They are made from ancient glass, stones and shells.

The American Ambassador’s wife asked me to do a show for the Embassy, so I did a whole lot of designs, did a brilliant show – and that basically launched the jewellery.

Tell us about your work with the remote villages?

I started doing a community thing for the villages – not a big scale, just kaftans and weaving and basketry work. With basketry I worked with native communities redesigning traditional baskets into contemporary colourful storage baskets which became a community project to provide income for the women and allowed them to retain their traditional skills.

It used to be a business and took years developing it with different villages. Now I continue to support the original first village Kuching in Sarawak East Malaysia, the ladies there – because I don’t want them to lose the little income I helped create for them.

How have you supported other artists in Malaysia?

I was approached to be the organiser for all the art shows for the state – in Kuala Lumpur, Singapore and so on, to promote the state’s artists.

These artists have never really had a voice anywhere, so that’s when I opened a couple of galleries and ran them as a company for 25 years.

I had 40 artists, sculptors, painters, basket weavers, I was even representing painter and sculptor Jason Monet, Claude Monet’s great, great, great nephew – I got commission work for him as well around Malaysia. 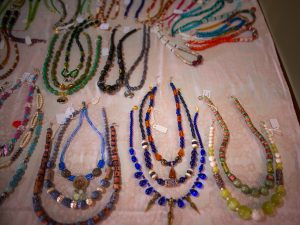 What advice do you give to budding artists?

Just persevere. Don’t let society, don’t let culture, don’t let the people around you tell you can’t do it.

Very few artists make a lot of money to live on, so I would tell my artists to get a job you are happy to do, that gives you enough money to support yourself and your family and gives you time to do what you love to do without outside pressures.

Instead of having to do 20 paintings that you are absolutely disgusted with because that’s what the client wants and you need to feed your family, you can do the painting that you want to do.

If the public doesn’t want it, it’s their problem, not yours, but you’ve done what you wanted to do and not been forced to do.

Margaret Tan’s work is featured in books, television, radio and news publications. Although she no longer runs galleries full-time, she conducts small, intimate displays of work. Her website is currently being developed and we’ll publish a link here soon.