The director of a local rock musical blockbuster has described the latest border bubble changes as devastating, and a case of big city politics getting in the way.

Tim McLaren, Centre Stage Event Company Director says the new rules prevents audiences from the Victorian side of the river from attending the final four sold-out shows of We Will Rock You – the musical by Queen and Ben Elton.

“This is devastating,” Tim explained.

“Family members and friends living just a few kilometres across the river, who haven’t seen the show yet, were waiting for closing weekend and now they can’t get across,” he said.

“The cast and crew, they’re resilient, they’ve been through it before, but at the same time its’s disheartening to see, halfway through the season we’re in this predicament again. So much work has been put in and once again the border community is missing out on a fun time I suppose you could say, hindered by bit city politics getting in the way.”

While ticket refunds are currently underway for Victorian audiences, the production company is now seeking support from Albury and surrounding NSW communities to help boost the numbers and help cover costs.

“We’re encouraging anyone north of the border to get along and support this show and support those who have put in the hard work and more importantly, support the arts industry,” Tim said.

“We’ve struggled to get through this COVID period. It’s not just us. It’s food venues, entertainment venues – they’ve had bookings for weeks with big parties coming to the show, now they’re missing out. It’s a flow on affect and the border community is again bearing the brunt of this.” 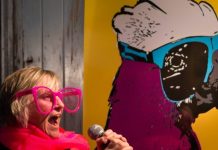