Remember when you first discovered a love of sport while playing with family and friends? SALLY HARDING took one for the team to try Foxtel Touch 7s rugby at the Albury Wodonga Rugby Union Club – the Border’s shining example of a national trend to make sport more inclusive and fun.

Being the youngest child in the neighbourhood, the only way older kids would let me play chasey with them was if I agreed to be ‘it’.

Being ‘it’ isn’t actually that much fun and it certainly didn’t encourage anyone to be a good sport. My little legs would work overtime while everyone else ran off laughing (‘It’ is not the title of a horror movie by accident).

But, you grow up, and those miles of chasing bigger kids paid off, sort of. In every sport thereafter, I would assume a defence position because I’d become good at reading the play.

It was also a skill that came in handy during motherhood, trying to run-down energetic toddlers (although once we had to corner our son in a cricket net to catch him. True story).

It is now the children in our family who play most of the sport and us adults work very hard to make it happen. Unwittingly, perhaps this places extra pressure on everybody to get results and win. Who doesn’t like a return on their investment?

Case in point, our son recently tried his hand at a new sport (not rugby union), started training, got the uniform and then just before the first game was knocked-out of the team because they only wanted ‘the best’. When I queried why things were so competitive in U12 community sport, I was told it was because “it upset players to be at the bottom of the ladder”.

The Australian Sports Commission, re-branded Sport Australia, has caught on to the benefits of making sport more inclusive and recently launched its Sport 2030 National Sporting Plan. It aims to keep young people engaged and encourage others off the couch (and/or electronic devices) – a bit like the 1970s “Life. Be In It” campaign did.

Sounds good in theory, but how does it work at ground-level, at the so-called grass-roots?

When Border Cafe was invited to the six-week Foxtel Touch 7s Rugby competition, I wasn’t overly enthusiastic. I’d played touch football before (similar to rugby, but with less kicking) and didn’t have fond memories. 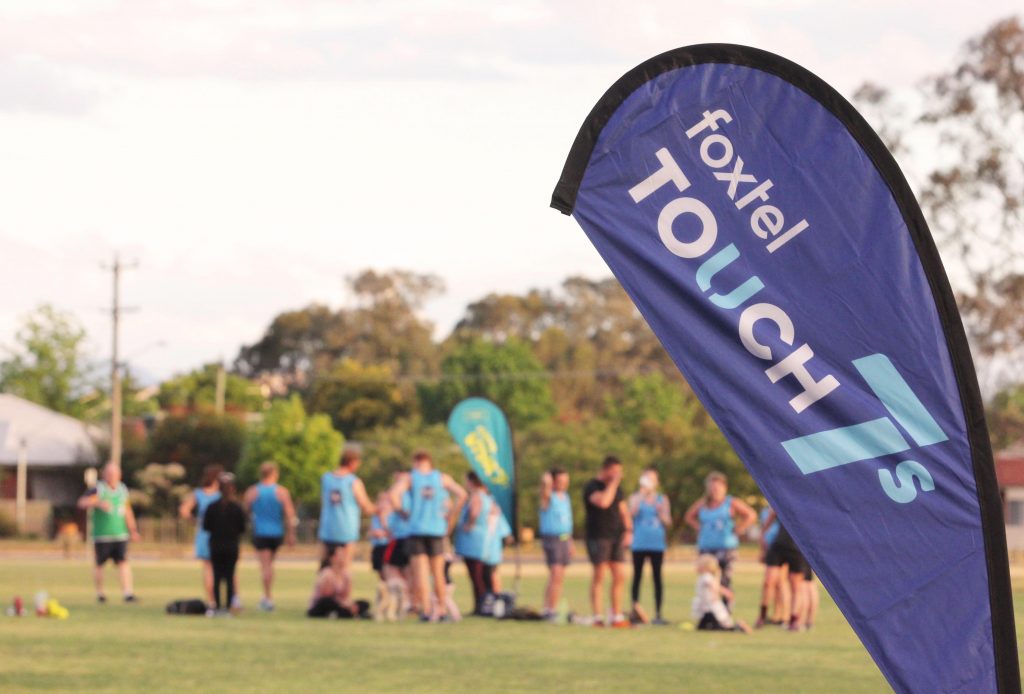 In younger days, in the Adelaide parklands, my teammates were strong city-dwelling farmers who were fit and fast and left me for dust. I didn’t really get close to the ball and contribute, but they were nice about it.

In Albert Park, Melbourne, several years later, things were much more serious. The last game I played was a shocker. I caught the ball, turned to run, then fell flat on my face when my legs gave way for no reason. My team mates simply stepped over me and kept going. Uber-urbanites this time, not farmers, but definitely playing for sheep stations.

Fast-forward to present day East Albury, and why would anything be different?

Well, for starters, I arrived to a sea of perfectly-manicured green turf with more players than I’ve ever seen at a touch football competition. 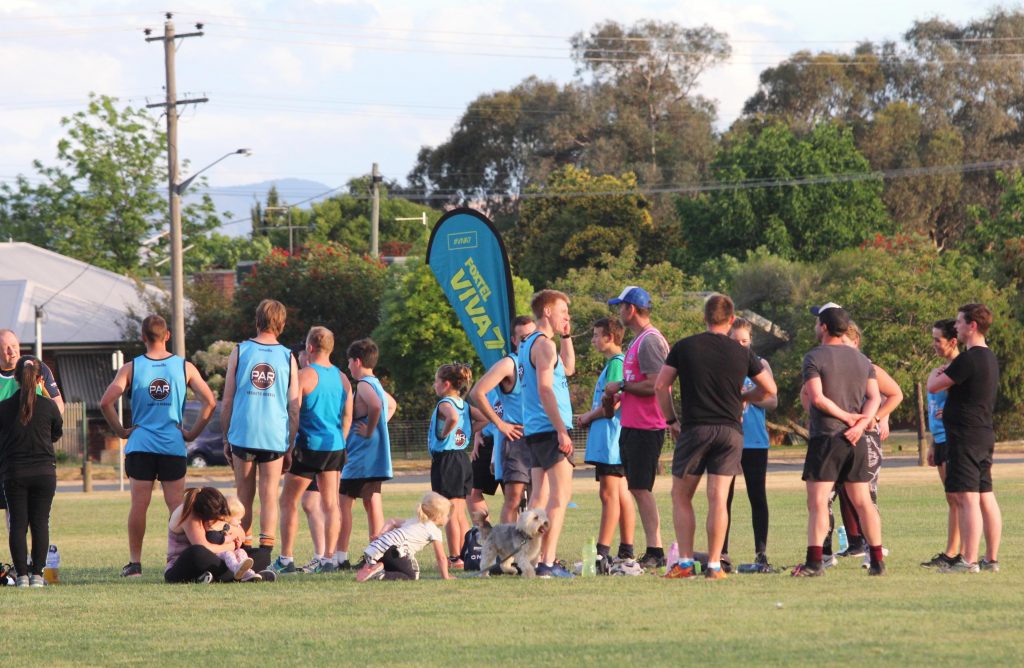 In the three years since this local competition started, it has proven so popular that the number of participants has increased from 98 to 250, ranging in age from around five years to sixty.

Then there was the very welcoming atmosphere. Cheery PA announcements kept us in the loop on game starting times and breaks and a cool song playlist was broadcast over a giant loudspeaker, comprising requests made by players during the week.

I was handed a shirt and told to join in, so I did. One minute of running around with my new team mates became several minutes. Then one game became two, with several genuine touches of the ball and a few breaks in between.

Remarkably, I was one of many mums playing with kids, husbands, brothers, sisters, colleagues and work associates and I felt right at home. 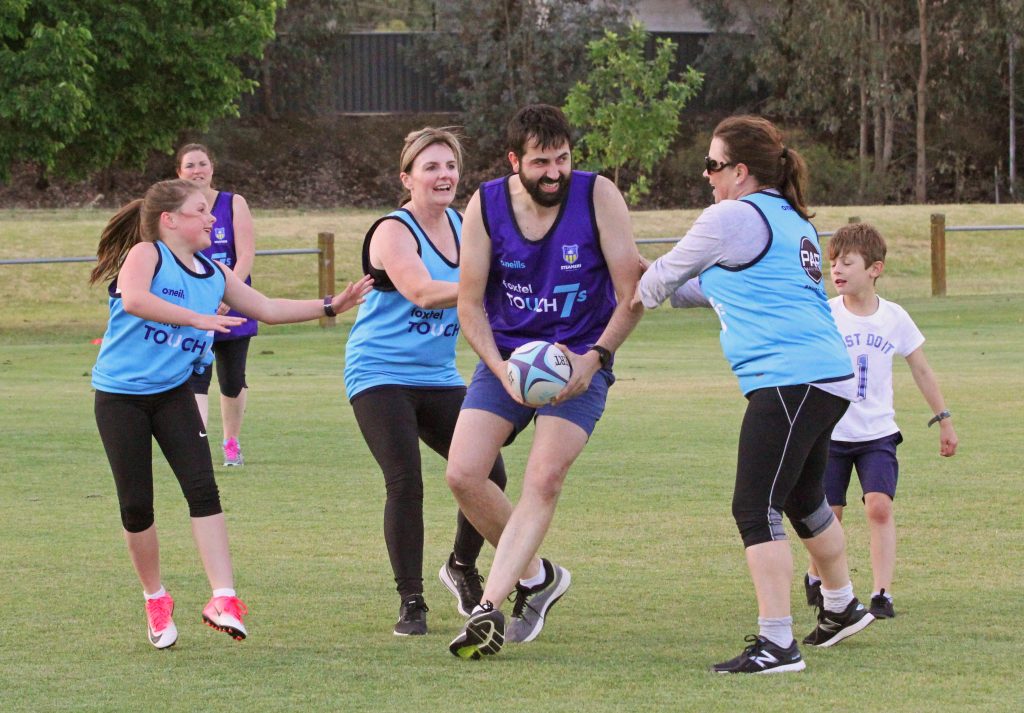 The volunteer umpires of this social competition no doubt have a big influence on its success. The pre-competition training focuses on managing differing abilities and skills to ensure everyone gets a fair go.

One of the girls on my team was a teenage district representative player and on the neighbouring field, first grade senior rugby players were squaring up against eight year olds.

After three genuinely fun games lasting a respectable 14 minutes each, the competition was over and it was time for a barbecue dinner cooked and served up by more good-spirited volunteers.

In the twilight I chatted to the competition coordinator, Daniel Hogg, as everyone else pitched in around us to pack up.

(Sally packed her camera and her runners! Her PHOTO GALLERY below)

It suddenly dawned on me that this is a family sporting competition like no other and that Daniel, a father of four, helped to build it from the ground-up. I was in awe, and even more so when I realised I hadn’t seen one electronic device in the whole time I had been there. Even my mobile phone was left in the car.

After decades of becoming increasing cynical about sport and its ability to be inclusive, I had just witnessed the pages of that ambitious national ‘participation-based ’ Sport 2030 plan come to life.

Maybe, just maybe, the next generation will get back to basics and share what we enjoyed as kids playing in our paddocks, streets and backyards. Except this time, hopefully no youngest-child like me will get left behind.

Keep up to date with more stories from the Border and North East by signing up to our free Best of the Week newsletter, direct to your inbox here.