Kevin Poulton and Kylie King have spent the first week teaming together for a new breakfast show on Radio 2AY.

For Kev it’s a return to familiar territory. For Kylie, it’s a change-up from her established career as a television sports journalist.

Kylie was initially introduced to 2AY listeners last week, prior to her ‘official start,’ when she filed stories and interviews from the Burrumbuttock Hay Runners leading into the Australia Day weekend. But Kylie says turning up for breakfast radio this week was a whole new challenge.

“I have always loved interviewing people, and finding out more about them and their stories, usually armed with a cameraman, or presenting quite scripted or planned stories, so live radio is a whole new ball game,” Kylie said.

“So far it’s been fun. You can’t help but laugh when you’re around Kev. He seems a very genuine, positive person who doesn’t take himself too seriously, yet is very connected to what’s happening locally. I’ve also known radio news hounds Paul McSwiney and Andy Walker for years as well as sports broadcaster Simon Corr, so it’s great to bump into them around the station as well.

“As much as we will no doubt have our differences, we are both passionate about the region and our local community, and hopefully we’ll complement each other.”

Kev is already familiar with the early starts, after he teamed with Luisa Pelizzari for a popular breakfast show with 105.7 The River (Triple M) for four and a half years, until taking time out to spend time with his young family.

“I’m like the common cold, I’m back,” laughed Kev.

“The timing is probably right now for me personally. We’ve had our fifth child who is six months old, our third child is going to school this year. We’re also extending the house at the moment, so it’s nice to be out of there before the builders get on site!”

Kev has always been drawn to radio, in a career that started after he volunteered in community radio in his teenage years, ironically with 2AY’s new Content Director and afternoon announcer, Dave Brunton.

“I get great pride out of knowing that someone else has smiled or laughed for the day as a result of listening.

“Yes there are sad moments and challenging moments in life, and everybody has that, but if you can help someone escape that, that’s what I think is the privilege with breakfast radio.”

While it’s only early days for this new breakfast radio combination, Kev says the signs are positive.

“The idea to have Kylie on board was originally floated by our CEO some time ago that maybe she might be interested to come to radio in between her television work with Supercars and her online publishing role with Border Café.

“When I heard that I thought ‘she’s very journalistic and takes that side very seriously, how would that go on air?’ Fortunately she’s really let her guard down to display her sense of humour and wit, not just her serious and professional side. So far, I think it’s working well. 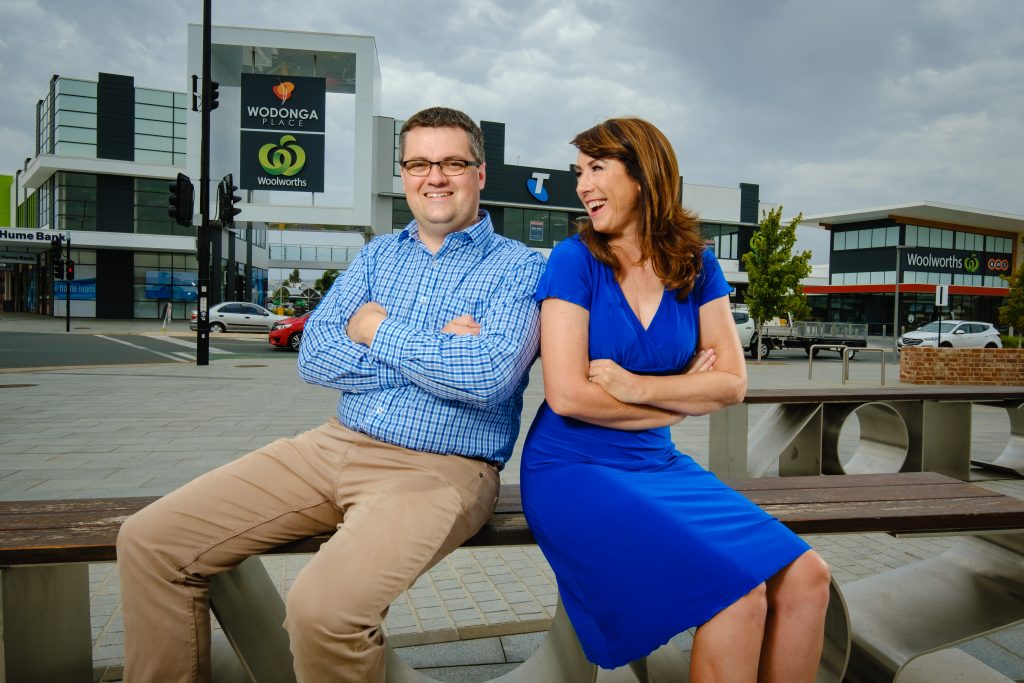 “Both are highly respected locals who care about the growing community of Albury Wodonga and surrounding districts.

“Already, you can hear their passion, intellect and sharp wit shine through. I look forward to working with them for many years to come.”

Content Director Dave Brunton is confident, given time to settle in, the combination of Kylie and Kev will prove a hit with 2AY listeners.

“It’s great to have a team of passionate local people who live on the Border and understand the Border. Sharing stories is our passion and I think Kylie and Kev will do that well.

“I’ve known Kev for a long time and he tries to know sport, but he doesn’t, so the fact that Kylie is here, with her sports background, I’m very happy, because she can teach Kev about sport and give him a few lessons.”

For more on 2AY: https://www.facebook.com/Radio2ay/?fref=ts