Charles Sluga has bucked the trend of artists setting up residence in Melbourne or Sydney.

Although he’s regarded as one of Australia’s most talented watercolour artists, he’s based in Yackandandah and has recently re-launched his studio and gallery that would be the envy of his capital city creatives.

“Many people have pre conceived ideas of watercolours as wishy wash and pale – but when they come in and see what I paint – it’s ‘wow,’ unexpected.”

“We wanted to bring the space up to a level that was equivalent to where I was as a painter and equivalent to places you’d find in Melbourne and Sydney,” Charles said.

“Even though we’re in the country, we didn’t want a country look – landscapes, sheds, seascapes – which has its place, but it’s not what we’re about and not what our clients are looking for.”

Top of the design brief was to find the perfect balance between a contemporary look, yet respecting the heritage of the building.

“The building was an athenaeum, so it was a place of learning and culture, so art sort of fits in with that,” Charles said. 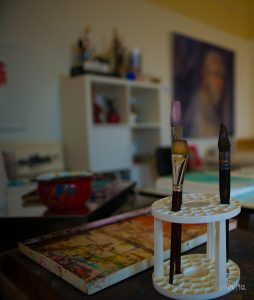 The refurbishment is more than just a fresh coat of paint inside and out.

“As you walk through there is a distinct delineation between the retail area – the prints, the cards, the shop – and the original works and my studio, where I also hold workshops.

“We gave it a clean white look in both rooms, so that the colours of the work can be showcased, rather than the dark walls of the building.

“We’ve filled the place with air and light and gave it that crisp, clean professional look.”

Charles hopes the sophistication of the studio and gallery reflects his personal style. 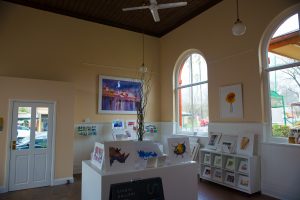 “Many people have pre conceived ideas of watercolours as wishy wash and pale – but when they come in and see what I paint – it’s ‘wow,’ unexpected.

“For example all the paintings in there are based on animals, a mini-theme to celebrate the opening – a celebration of colour and form and texture and they are all painted on plastic.

“Painting on plastic with watercolour is something I am quite sure I introduced into Australia so it breaks out of that mould of watercolour having to be on paper and delicate and pale and so people are quite, ‘this is not what I expected from a watercolour’ which is what I am trying to do – alter people’s perceptions of watercolour.” 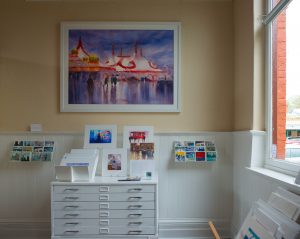 Charles gains inspiration from his travels around the world, hosting painting tours and workshops in exotic locations such as Croatia, Italy, France and England.

But he is equally inspired by being based in the country, among other creatives.

“There’s an expectation that the best artists will live in the city, but Yackandandah has got a really good mix of people and a wonderful creative side.

“I find clients are coming to me, rather than me having to go to them.”