From managing his first venue at 21 to opening two restaurants in his home town of Albury, it’s hard to keep up with restaurateur Ben Blomeley.

Ben Blomeley’s first work in hospitality began with picking up glasses at the then Globe Hotel.

“I did one term of a uni course in Hospitality Management before deciding I wanted to focus on ‘on the job’ training. That included working at the Zed Bar, The Bended Elbow, Paddy’s and Groove Saint,” Ben said.

He then ventured north to Byron Bay with his partner, and now wife, Melissa for four years to gain some more experience. Two and a half years ago the couple returned to Albury to be closer to family and married.

“Byron was a lot of fun, but I knew I needed the support of home to have a real go at something.

“There was some thought of maybe doing something different. Like most career hospitality workers, I wanted to do anything but this, then I thought keep going with what I know. As they say, ‘If you know boats, sell boats!’”

Ben also wanted to bring back a little of the Bay and established South Cali Cantina (So Cal) in Dean Street just over a year ago.

“It was inspired by one of my favourite venues in the Bay. The Californian style Mex is popular in the cities and I was confident it would work here and it has.

“I also wanted to show that restaurants don’t need to be stiff and great atmosphere can go a long way; that the product can speak for itself.”

His newer venture Din Dins is just five minutes walk from So Cal in the Quest Apartment building on the corner of Smollett and Townsend Streets. Its cuisine is a world apart from So Cal’s. 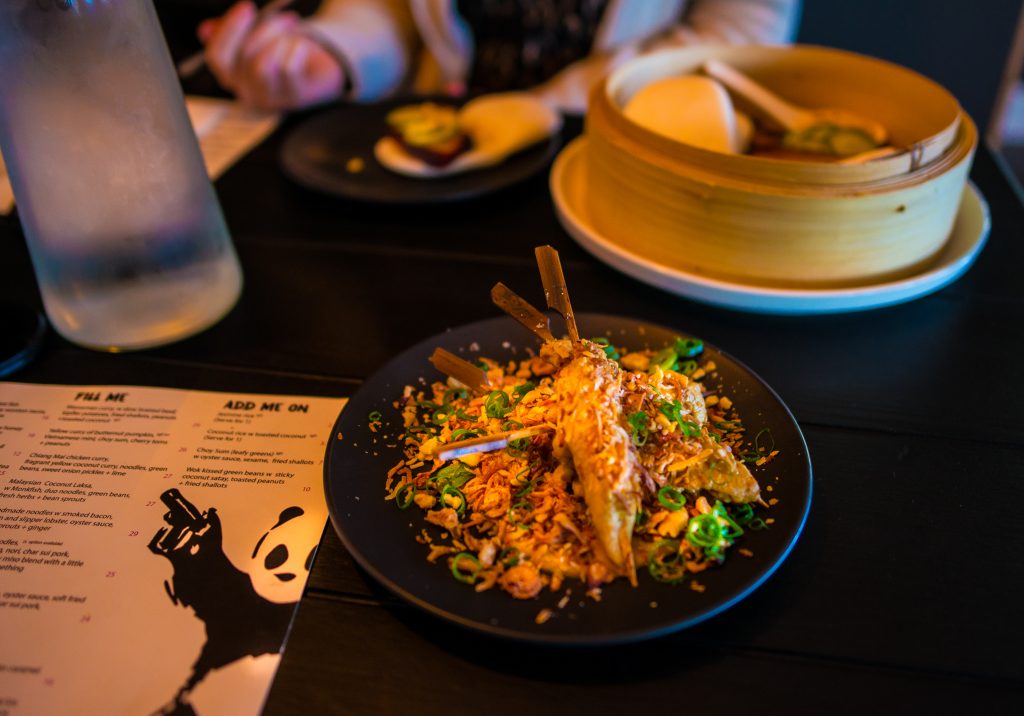 “Din Dins follows the trend of ‘Modern Asian’ with the modern referring to the combination of different Asian influences on the menu.

“Our head chef, Andrew Scott, has had a lot of experience with this cuisine. It was the case of the chef first: the menu at Din Dins is based on Andrew’s experience.”

That experience includes making the perfect dumpling. Ben said the secret to making it is quite simple.

“It should be made fresh daily, rolled with care and cooked slowly. Flavour is everything so you take your time during prep,” he said.

Unmissable as you walk into Din Dins is the huge gun toting panda, painted by Ben’s dad, Peter.

“Dad was a sign writer by trade and loves a challenge. The builds for both restaurants are full of stories of late nights and early mornings. You just can’t do this without that support which was one of the reasons we came home.”

The sense of family extends beyond blood and Ben has great admiration for the staff.

“They truly are family and a small but strong team keeps everything alive. Managers Emily and Brea keep South Cali running and all our casuals that are the frontline are the reason customers keep coming back,” Ben said.

Ben has sourced local chef talent in the kitchens at both restaurants.

“Head chef Andrew was well travelled before partnering up with us and has created a strong team to support the venues. South Cali is powered by Jeremy and Dan, whilst Allan and apprentice Mason keep the woks hot behind Andrew at Din Dins.”

Ben said the local dining community has embraced both restaurants.

“People’s expectations are high. We’re offering casual dining at both venues with a high end product, but it’s the whole experience that’s key.

“We have full bar set ups with ‘en pointe’ cocktail lists constantly updated by head bartender, Charlie Way, and I spend as much time on playlists as I do on rosters!”

“My motto is perfect preparation prevents poor performance, so on a booked out night it takes a lot of preparation.

“My favourite part of the day is when the heat lamps turn on and we all just do what we do best,” Ben said.

So Cal and Din Dins haven’t been the only new arrivals. Ben and Melissa welcomed their daughter, Harper on January 5, just five days before opening the Asian Fusion restaurant.

“Building and running two venues has its challenges, but the industry moves quickly so stay tuned for a third offering from the team.”