Highly regarded as a successful sports journalist, creative PR man, event organiser and entrepreneur in motorsport circles, ‘Crusher’ is well known as a man with some incredible tales to tell (no doubt only some of them can be printed), so it makes sense that he’d want to publish a book ahead of his 50th birthday in December.

His time growing up in Albury and working at the Border Mail is where his career was forged – but perhaps his entrepreneurial spirit was shaped years earlier, as a cheeky rule breaking teenager at Murray High School. 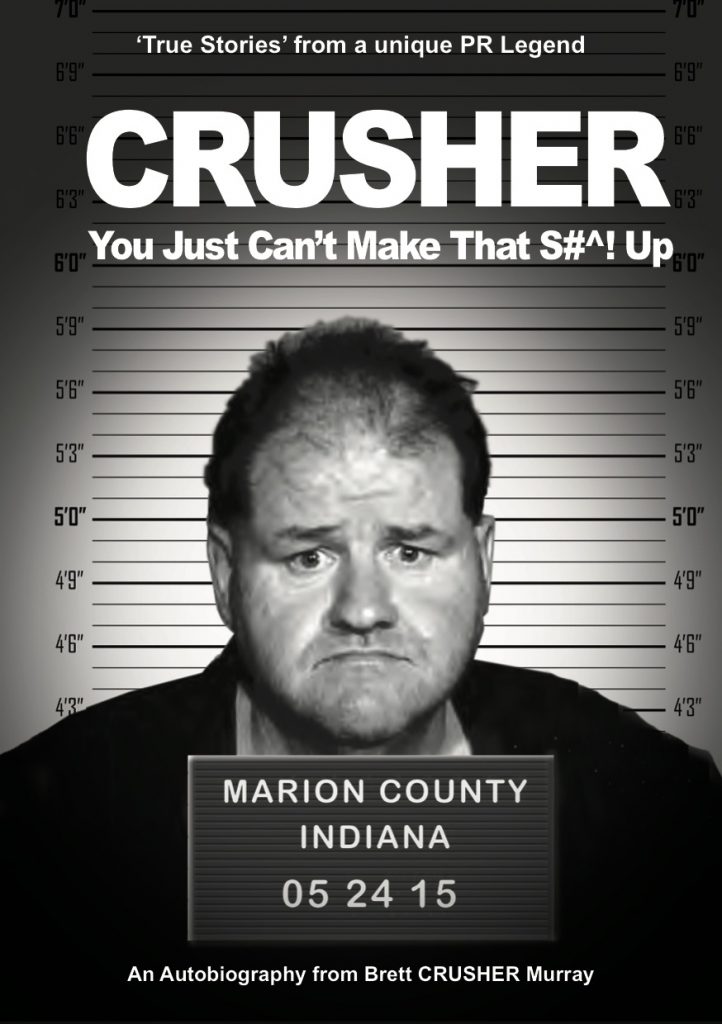 “My school days were quite entertaining,” Brett said.

“I made more money in my last two years of school than my first three years of work running an SP book, which was quite successful.

“I also sold a few crackers (fireworks), which I ended up getting caught doing, but managed to stash away the cash before they found it.

“We used to go to Canberra every second weekend to see relatives and I’d take a suitcase and fill it up with crackers, come back and sell them.

“One bloke let one off in the classroom, and another bloke dobbed everyone in, the cops came to the school and yeah, I got suspended, until my parents came to school and sorted it out the next day.”

The former Border Mail sports journo has packed a lot into his 50 years so far – not bad for a country kid who loved sport, but wasn’t a particularly great scholar.

He started his cadetship at the Wagga Advertiser, but is the first to admit he was lucky to ‘bluff’ his way through.

“There was an old Editor on the paper there, Brian Junck who really taught me a lot. I couldn’t spell ‘cat’ – it was appalling. I got away with English in Year 10 because I cheated.

“It wasn’t until years later I realised what this guy had done for me.

“Then I got to the Border Mail at Albury and the Editor, James Thomson basically said ‘I can’t believe you’ve got this far. Your writing’s atrocious, you’ve got to do something about that.’

“Not many people know about this, but I enrolled in a night course in High School English at TAFE. I did that, and ended up being Acting Sports Editor of the Border Mail within two years and away we went from there.”

Brett has fond memories of his time at the newspaper during the 80’s, but admits most of the best ‘yarns’ were forged during late nights in the local pubs, which often took their toll.

“I remember covering a game of footy in Wodonga, after a few nights on the drink,” he said.

“I’m sitting in this cubicle and I dozed off. When I’ve woken up, they were kicking the other way, I thought ‘oh, I’ve slept through the quarter.’

“Next thing, the siren’s gone and they’re walking off. I haven’t slept through a quarter, I’ve slept through the whole game, both sides have kicked 12 or 14 goals.

“Then the old blokes next to me, the time keepers are like ‘yeah Brett, we thought you needed to sleep, so we took a few notes for you.’

“I walked down to the dressing rooms, Jeff Gieschen was the coach of Wodonga at the time, and I said ‘so Giesch, what do you think?’ He gave me some cracking quotes and I used those and wrote the yarn and got away with it.”

Brett eventually found himself working on the Gold Coast, and went from journalist, to PR and events man, promoting the Gold Coast Indy 300, forming the BAM Group, a media, communication and marketing company, and developing a hugely popular motorsport news site Speedcafe.com

In recent years Brett hit the national and international headlines, forming his own race team, Team Murray, which competed in the historic 100th running of the Indianapolis 500, with Matt Brabham as driver.

“I never showed any emotion until the car pulled back into pit lane and Matt got out of the car.

“I lost it, I teared up. It wasn’t because the car was in one piece and I still had a house, it was because Matt was still in one piece. It’s a place where you can win the race, or you can kill the driver, it’s that sort of place.

“To be there for the 100th race, the biggest one-day sporting event ever in the world, there’ll never be a bigger one, was huge.”

While Crusher’s book will no doubt be filled with jaw dropping stories throughout his colourful career so far, there’ll need to be a sequel, because there’s bound to be plenty more adventures in the pipeline, and more ‘cracking yarns’ to be shared.

To purchase a book visit: http://crusherthebook.com/preorder

Price: $49.50 including Express Post delivery if needed before Christmas. Book will be personally signed with a message if requested.