The story of the homecoming experience of World War I and World War II Aboriginal soldiers has been all but erased from the pages of Australia’s ANZAC history, but Border playwright Leisa Whyte is determined to play her part in redressing this in her play, Then He Came Home in Albury on Friday night.

In 2013 Leisa Whyte was reading a book by Aunty Betty Pike that talked about the Lovett Brothers who were Gunditjmara (Victoria’s Western District) and the first family group to be inducted to the Victorian Indigenous Honour Roll.

“Five of them went to the war and then they all came back and they were given nothing, no privileges, unlike non-Aboriginal soldiers. It struck me that I didn’t know this history and then why didn’t I know this history?’ Leisa said.

“And now it’s 2018 and there’s been a lot of sitting around and talking, the classic ‘having a yarn’, and asking who has had this same experience with their families? Because we would love to include elements of your family with the research to make it real and authentic.

“I also wanted to make it about this area. But all this, including applying for grants and of course more research, can take time.”

Leisa says the project has also benefitted from her time as a successful applicant for the 2017 Playwriting Australia and HotHouse Theatre partnership, Outposts, for emerging writers in Albury-Wodonga and surrounding region. 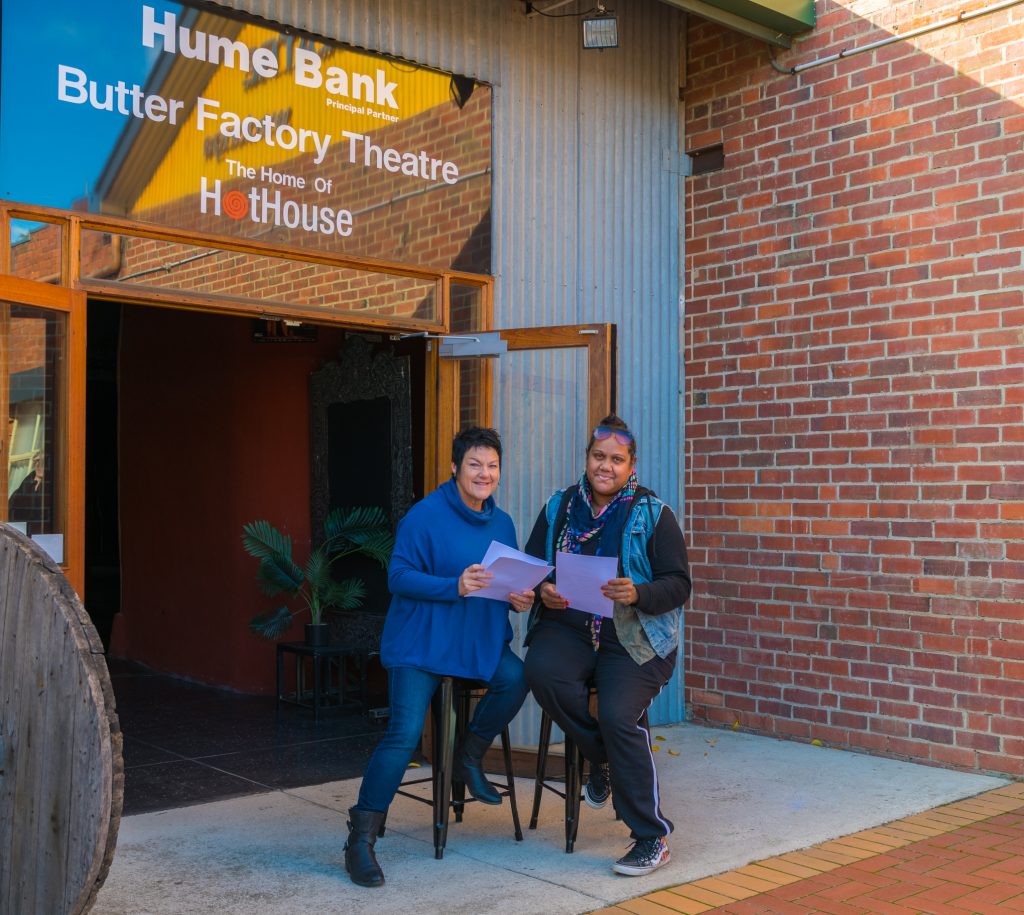 Four writers, including Leisa were selected to the final stage of development, where their scripts were refined with one-on-one dramaturgy provided by Lachlan and Campion Decent, award-winning playwright, dramaturg and former HotHouse Theatre Artistic Director.

“I worked on parts of the play during my time in Sydney, only small parts, but it really helped me to make the dialogue real, and it has been further refined from feedback from the actors.

“I am learning so much from Elaine about the importance of listening to the actors, because as a writer you’re constantly writing it the way you are hearing it in your head, hoping that’s how you would say it, and sometimes you write something that is beautifully written but terrible to read and say. I’ve learnt a lot too about trying to talk in the person’s voice,” Leisa says.

“This reinforces what I grasped really quickly in Sydney: that is if you are writing a story that is real, it will work. If you’re trying to make something up and you don’t know what you’re writing about, it is not going to work, but as soon as you get to the heart of what you are doing, then off it goes,” Leisa said.

It is that authenticity that has struck director, Elaine Crombie, who is working with Leisa as part of her Month in the Country residency, a partnership between HotHouse Theatre, Murray Arts and AlburyCity.

“But it’s not really even about that because this is a bigger story than just talking about the blackfellas in the story. These ANZAC stories are everybody’s business.”

“Maybe it will just create conversation of ‘I wonder if that happened in my family’ or maybe people will talk to somebody who has been through this or has family members who have experienced this.”

Nomad Films’ short documentary highlighting the local interviews conducted as part of the research will also be screened on Friday night.

While Leisa is the playwright, Elaine says as a black director directing black stories she has a responsibility to make sure that the story is told authentically.

You can watch the Nomad Films documentary here: https://www.murrayarts.org.au/index.php/news/669-then-he-came-home