As recently as eight years ago there were gendered specialities in circus, but a group of young women will take to the stage this week to show how much that has changed.

ROBYNE YOUNG caught up with two of the acrobats, former Fruities who trained at the Flying Fruit Fly Circus, to chat about the experience of devising their show BOSS SQUAD and the messages they aim to highlight.

BOSS SQUAD, a collaboration between circus companies, MadHouse and Point & Flex had its beginnings at the 2015 FFFC National Training Project when Marcela Scheuner and Felicia Lannan and fellow former Fruities, Amy Stuart and Kelsey Shepherd along with Marina Gellmann and Lisa Goldsworthy, were training on the teeterboard.

“They will see us flip, jump and fly”

“This skill was seen as something males do, but we decided it was time to demonstrate that girls and women can do this and a lot more in circus,” Scheuner says.

The first development of BOSS SQUAD was at the South Australian Circus Centre in 2017. Fruities alumni, Spenser Inwood whose credits include Circus Oz and a show at this year’s Edinburgh Fringe was brought in as director.

Lannan says Inwood is like the glue in the production.

“As director she takes our ideas and turns them into reality. She’s been delightful to work with.”

Both performers say the training they’ve received in production of a show as well as their circus training has been vital in bringing BOSS SQUAD to fruition.

“We’ve learnt that things need to happen in a certain order and so we’ve had great direction in, for example, putting rehearsal schedules together,” Scheuner says.

The skills of the six include trampoline, pyramids, hula hoop, cloud swing, Korean and Russian teeterboard and tumbling. 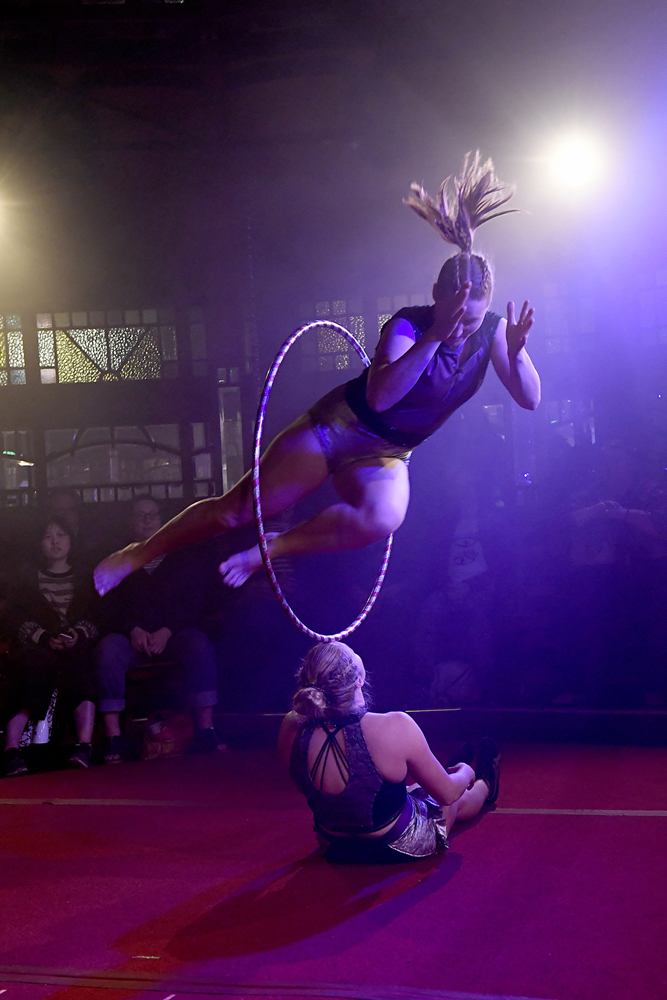 “Through the performance of our skills the audience will see six strong young women on the stage doing their own thing and not needing to accommodate any male egos. They will see us flip, jump and fly.

“And It’s fun. We get to be silly, we get to be ugly, we get to do everything. We work collectively, and as individuals. We get to communicate our experience of circus and contribute to the current state of the world and feminist movements by doing what we do best: circus.”

BOSS SQUAD is one of a number of shows in the fourth summer festival of circus, Borderville, which is cementing the Border’s reputation as the circus capital of Australia.