Our intrepid bordercafe.com.au contributor Krysten Clifton is usually unearthing stories about locals doing great things around the Border and North East, but this time our go-getter reporter finds herself the subject of a heartwarming storing.

Krysten is about to embark on a personal mission as a volunteer for Free The Bears and is hoping locals can help support her fundraising efforts. This is her story.

It was a regular Thursday night. I was sitting on the couch covered in dogs and scrolling through Facebook.

My scrolling thumb hovered for a moment at a post featuring a black bear happily sitting on his bum, watching his toes wiggle and leaning on a branch as if it were a bar. I’d started following a group called Free The Bears sometime earlier in the year and looked forward to regular updates on their rescued sun and moon bears. Then I saw the word ‘volunteer.’

Admittedly, I’d never really considered volunteering for anything. I spent a lot of time being outraged and devastated about the state of the environment and the way animals are treated, but aside from a handful of donations I’d never actually done anything of impact, until now.

I suppose I can blame my husband for this sudden jolt into action. When he came to me a week or so before and told me a five month deployment with the army had come up, let’s just say there were a couple more wine bottles in the recycle the next morning.

As much as I selfishly wanted him to be home with me, I could see the excitement beaming out of him at the opportunity to be a leader for something he believed in. I was a little slow on the uptake, but once I saw that happy bear it finally occurred to me, ‘I could do that too.’ And here we are. 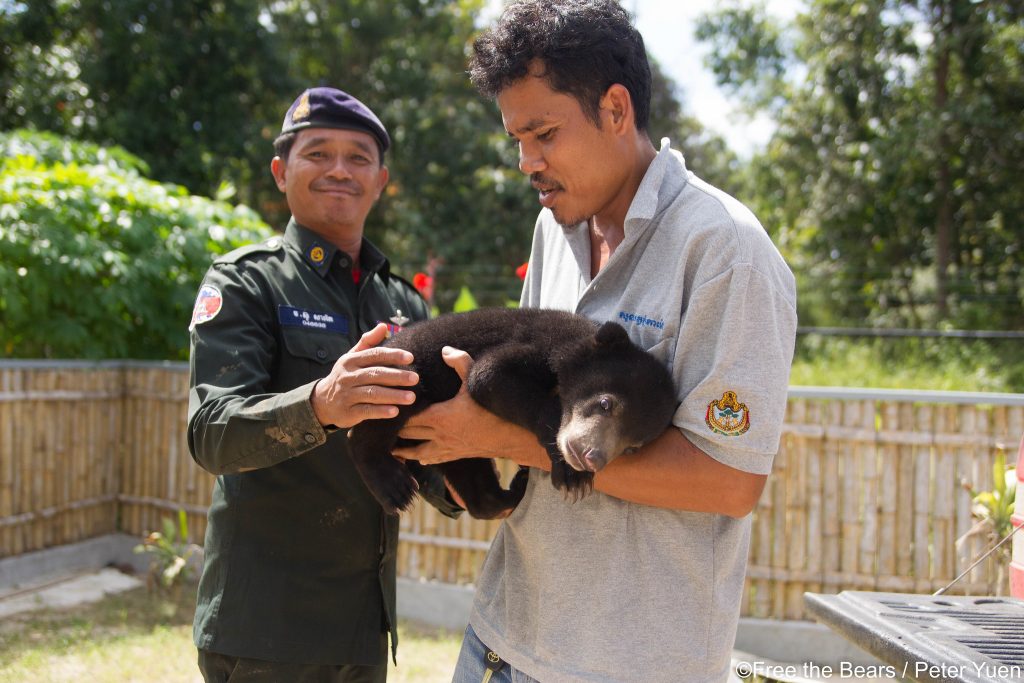 I’ll be flying to Cambodia between Christmas and New Year to volunteer with Free The Bears for two weeks. The question I generally get at this point is ‘what will you be doing?’ To answer that, I’ll need to give you a quick spiel about Free The Bears …

Free The Bears is an Australian charity that frees illegally captive bears in Cambodia, Laos and Vietnam. Besides habitat loss, one of the main threats to bears in Asia is the illegal wildlife trade. Many bears are rescued from exotic pet owners, people mutilating them for ‘bear paw soup’ or abusing them in traditional Chinese medicine.

Sun and moon bears are the smallest of the bear species and lead horrific lives once illegally in captivity. Those used for traditional medicine are farmed for their bile. ‘Farming’ involves being held in tiny cages like battery hens with dirty catheters inserted directly into their gallbladder to ‘milk’ their bile. This is their life for 20-30 years.

To me, that’s a bloody disgrace!

So rather than righteously clicking the angry face emoji and spending the rest of the day trying to push these heartbreaking images out of my head, I decided to support a reputable not-for-profit started by an equally pissed-off Perth grandmother who has saved over 950 bears to date.

Free The Bears rescues bears from captivity, giving them the medical attention they need and introducing them into purpose built sanctuaries. As such, I’ll be working at the Cambodia sanctuary cleaning, preparing food and enrichment activities, making hammocks and anything else that’s needed.

I could write for hours about this amazing organisation, how they work and the bears they rescue, but the best way for you to find out more is from their website: https://freethebears.org/ and social media.

I can’t imagine going over empty handed, so will be holding a fundraiser on 6 December at the Albury Cinema. Attendees will enjoy a screening of Terminator: Dark Fate and a seriously epic raffle (just in time for Christmas) featuring delicious products from the Australian Pumpkin Seed Company, Billson’s, Amulet Wines, Tolpuddle Cheese & Farm Foods, Beechworth Bakery, Walkabout Honey, Lumina Lifestyles and more.

One-hundred-per cent of proceeds will go directly to Free The Bears and any donations are tax deductible. The best way to support is to come along to the screening, you can buy tickets at: https://www.eventbrite.com.au/e/free-the-bears-movie-night-fundraiser-tickets-79979399537

If you’re a business and would like to donate some product, please email me at [email protected].

The bears and I thank you!